We are more than happy to help you, kindly call or email us and we will assist you with best of our services. 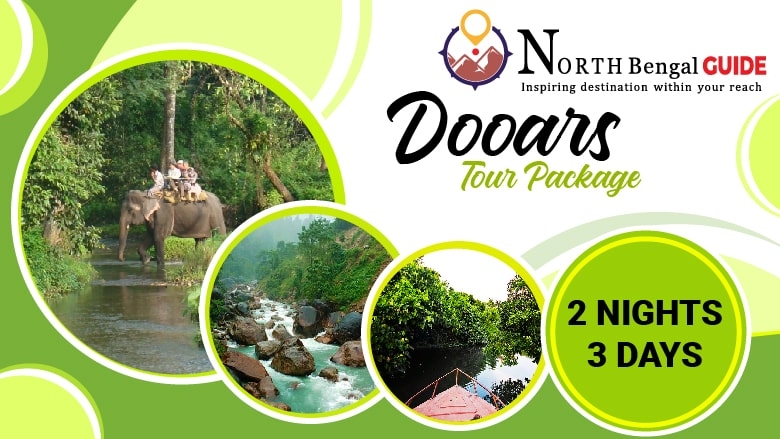 Once guests arrive at New Alipurduar Junction, our representative will meet and greet them. Next, our driver will pick them up for Jaldapara transfer. The approximate journey span will be around 1 hour. Guest will have their lunch in the resort. The rest of the day is all theirs. Finally, dinner in the evening and night stay.

Guests will be going for Buxa Jayanti Sightseeing today. They will begin exploring Buxa Fort and Lepchakha Village after eating breakfast at the lodge (Note- In order to visit these places, guests have to trek). Additionally, visitors will tour Rajabhatkhawa Museum, Pokhri Hill, TGN Tower, and Jayanti Riverbed. After returning, dinner will be served. Spend the night at the resort.

Guests will check out from the resort after having their breakfast. However, before being dropped at New Alipurduar Junction, guests will be exploring Sikiajhora. Guests will truly enjoy the boat ride on the lake. From the watchtower of Sikiyajhora, guests will be able to catch the glimpse of the lush green forest of Buxa Tiger Reserve, river streams, and the hills of Bhutan. Jaldapara Buxa Jayanti Package ends once guests successfully reach New Mal Junction.

Jaldapara, Buxa, and Jayanti are some of the promising places one can visit during their Dooars Tour. Jaldapara Buxa Jayanti Package includes these breathtaking sightseeing places. Here, have a look at some of the major ones.

Buxa Tiger Reserve - In the Alipurduar District of West Bengal, Buxa Tiger Reserve is one of the popular tourist sites. It is spreading up to 745 sq km of vast land. It is a natural habitat for many wild animals like the Indian leopard, Bengal tiger, clouded leopard, giant squirrel, gaur, chital, and wild boar.

Buxa Fort - At an elevation of 867 meters above sea level, Buxa Fort is a must-visit tourist site in this Jaldapara Buxa Jayanti Package. The fort is known for its interesting historical significance. Even though the fort is now in ruins, the beauty of it and its surroundings is still intact.

Jaldapara National Park- West Bengal's one of the popular national parks is also included in the package. It is situated on the foothills of the Eastern Himalayas at an elevation of 61 meters. The major wild animals that can be seen here are- the Indian leopard, Indian elephants, Sambar deer, barking deer, spotted deer, hog deer, wild boars, and Gaur.

Q: What are the main tourist sites on the itinerary?

Q: What type of accommodation is available in the region?

A: In this region, there are predominantly resorts available in various categories ranging from budget to luxury types.

Q: What is the duration of this Jaldapara Buxa Jayanti Package?

A: The duration of this Jaldapara Buxa Jayanti Package is 2 Nights and 3 Days.

Q: Is this itinerary entirely customizable?

A: Yes, this Dooars trip itinerary is extremely modifiable. Even the length of the tour, the location of their accommodations, the pick-up locations, and other details are up to the guests.